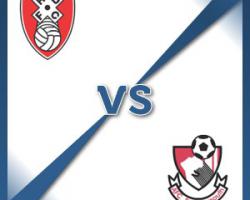 Rotherham are expected to include new signing Conor Sammon in their squad for the home game against Bournemouth.

Striker Sammon has joined on loan from Derby until the end of the season after completing his temporary spell at Ipswich.Wingers

Danny Ward - he made his loan move permanent this week - and Adam Hammill, plus midfielder Jack Barmby are hoping to make their home debuts after making their first appearances for the club in last week's defeat at Brentford.

Bournemouth could recall Yann Kermorgant when they make the trip north.The Frenchman began on the bench in last weekend's shock loss to Norwich but he could be stepping back into the starting line-up in place of Brett Pitman.

Meanwhile, centre-back Elliott Ward came through 90 minutes in a midweek friendly win but is unlikely to force his way into the starting line-up

A number of Eddie Howe's squad players also staked their claims in that 8-2 win over Swindon with the likes of Junior Stanislas, Ryan Fraser and Eunan O'Kane finding the target.The Cherries, who head to Rotherham full of confidence having won 5-1 at the New York Stadium earlier this month in the FA Cup, remain without Tokelo Rantie who has hooked up with South Africa for the African Nations Cup